I am a student at UCF currently enrolled in Computer Science. I'm interested in becoming a programmer and wish to develop video games. I also have an interest in drawing and animation. The histogram is a tool we used in Photoshop that showed us the tone ranges within in image and allowed us to manipulate them. We used the histogram in this class to adjust the brightness and contrast in a picture. 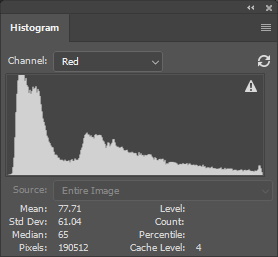 The hardest part of the Social Media Interview assignement was finding someone to interview. I wasn't too unfamiliar with audio editing, so I managed to pick up what I needed to do and accomplished it. I tried to remove as much of the noise as possible as I wasn't working with a quality microphone and I tried to balance the audio levels. My friend wasn't as loud as I was so I had to manually configure that.

The process I went through with in the Social Media Interview are largly the same with this assignment. The major difference was needing to do research on the topic I chose. It also needed to be within the time constraint which I struggled with for some time. Adding more to the audio track required me to either rerecord the whole thing or attempt to seemlessly edit in another audio clip. I believe I ended up doing the latter.

The digital storytelling project was a difficult project mainly due to me being camera shy. Other than willing myself to record it, it wasn't too hard of a project. Editing it and audio adjustments weren't too difficult due to the previous audio sections being ample learning tools for this asigment. The video editing aspect of this project was more difficult than I had expected when going into it. The software was something I had to get used.

This visual effects assignment was probably the longest I had spent on an assignment in this class. Having a choice between which tutorial we'd use and follow along with I managed to choose the longest one. Depsite the time it took, I had some fun with this assignment and learned alot about Adobe After Effects and how it works. All the new information learned through this assignment drives me to learn more.

During this class I learned that video games can improve problem solving skills. It allows people to look at issues and break them down into smaller pieces and recognize them as puzzles. Games also allow for several people to work together in a virtual space. They bring together hundreds of players to work towards a goal together. Reflexes are also improved through prolonged play of games.

Deepfakes are a very interesting technology as its use has been highly controversial. Several individuals have used it to bully and defame celebrities and political figures. Although this isn't something new, it has a high chance of being mistaken for reality. False information could be easily spread through them by faking speeches by popular figures. Most Deepfakes are apparently pornography edits.

AR and VR can be extremely helpful tools for education. Used for creating alternate reality scenarios and renact situations that would normally be extremely dangerous to recreate. They are also immersive which helps students engage in the classroom more than normal. It could help many students with ADHD and ADD focus in with enthralling them in a Virtual space.

In class, we were assigned to create a blog using wordpress and host it online. We weren't required to know any HTML or CSS, using only the tools provided by Wordpress. The process of making a blog was all around really fun and it was exciting to easily make a personal site even if it was simply used for this class. With that said, I do think the tools provided were very limiting and didn't allow for much creativity without implementing knowledge we had not learned up to that point. Namely, HTML.

I've provided a link to my blog below!"

What grade am I getting in this class?: